Some pictures of town, by request: 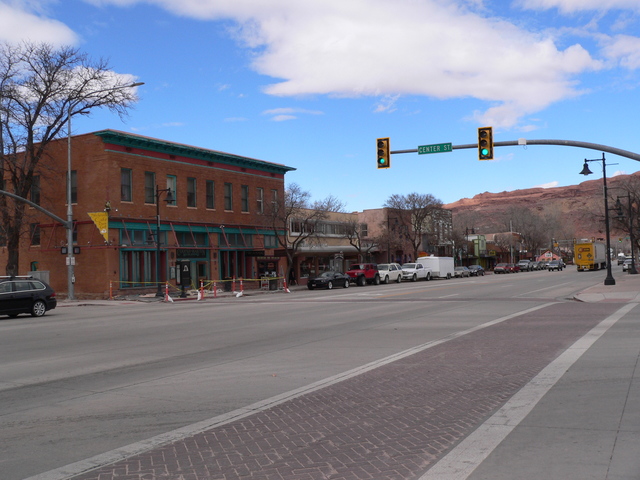 Corner of Main (US Highway 191) and Center, looking north. These were taken a few weeks back – note the lack of tourists.

The bottom floor of the building at the corner was a horrible restaurant that went out of business 3 or 4 years back, and has been vacant ever since. Someone has rented the building and plans on opening a new restaurant soon. 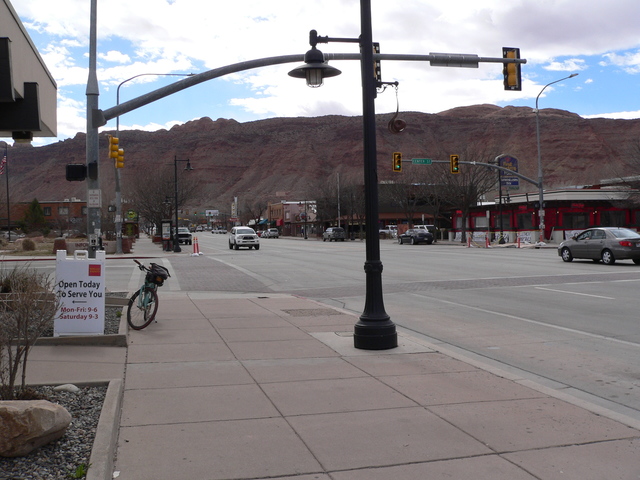 Same corner looking south. Note how the cliffs of the Moab Rim are visible from just about everywhere.

Main Street is mostly hotels, restaurants, and things like souvenir shops; although it’s also where the businesses for locals are, like the grocery shops, banks, and drug store.

Q: How do you know you’re in a small town? A: The Chevy and Ford dealers – the only two car dealers in town – are the same business! 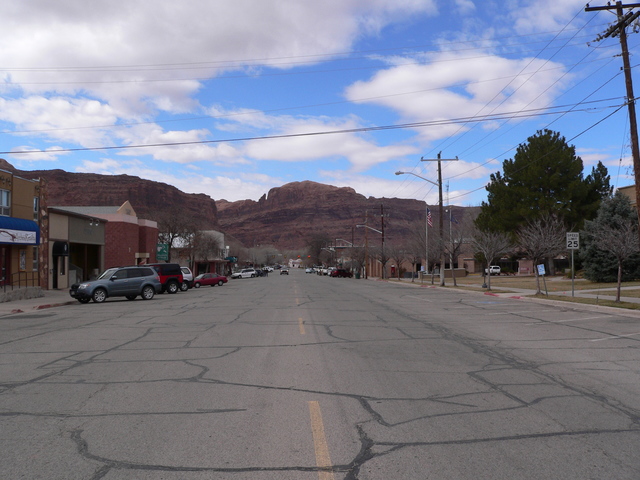 This is Center Street, out near the Museum and the Government buildings. Again, can’t miss those cliffs. 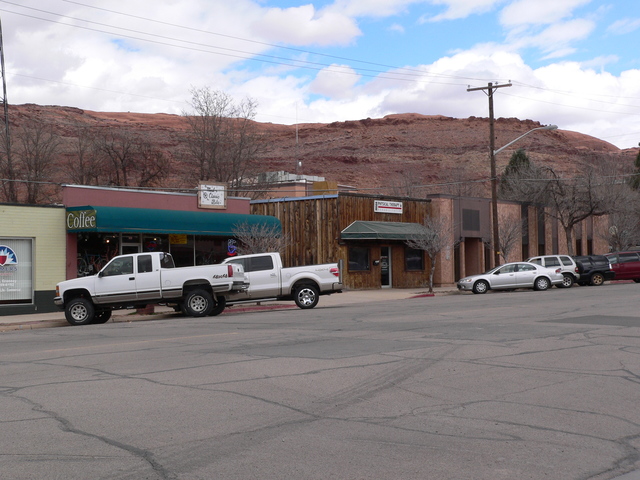 Also on Center: physical therapy office. Bike shop next door is a small, recent one (#5 of about 8 in town).

This is Star Hall – a wonderful classic old west hall, perfectly preserved, and still in regular use. Built by a certain religious group – $1 to the first person who guesses which one – and opened in 1906. It’s been used for everything you can think of since. 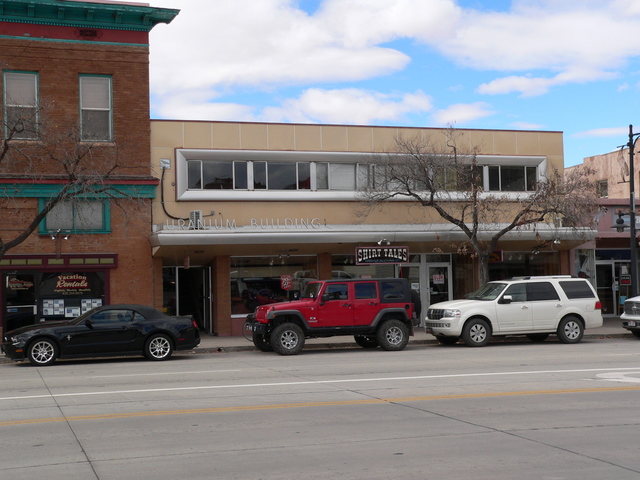 The uranium boom of the 1950’s is still visible – hopefully the “Uranium Building” wasn’t actually built from uranium. Maybe the t-shirts they sell there now will glow in the dark? 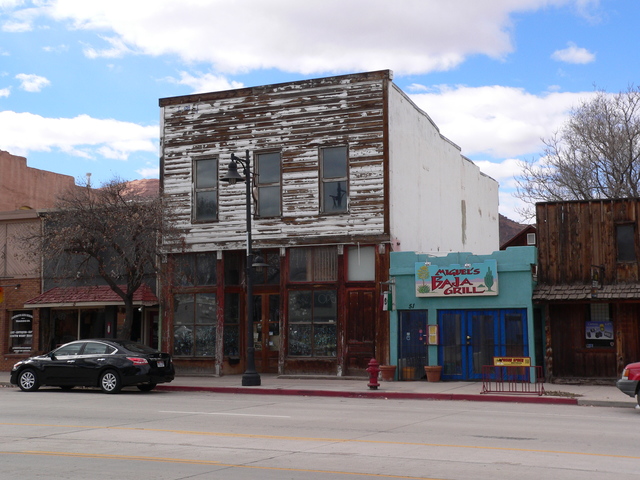 This is a storefront from that same era – basically unchanged for 60+ years. I’ve found this same building in old black-and-white photos of the era, back in the days where it had paint. It’s a vacant building now. The Mexican restaurant next door was an alleyway back then – at some point I guess they threw up a storefront and put in tables; it still doesn’t have a real roof. 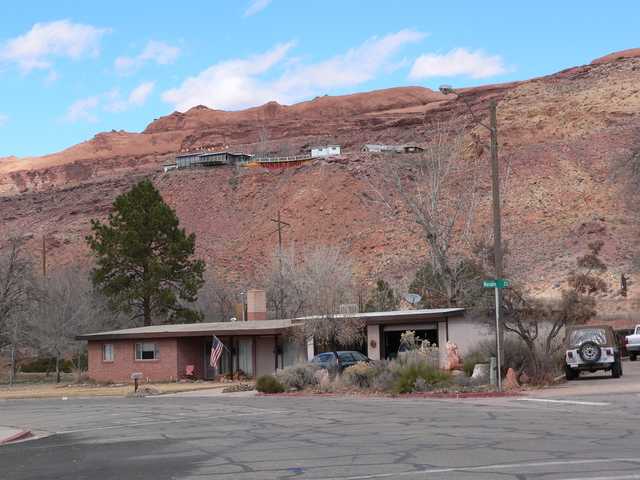 When the uranium boom hit, the guy who found the big lode – Charlie Steen – immediately became insanely rich. He bought up a huge section of land, and built a house on the top of the cliff overlooking town (the upper building in the photo). So, imagine you’re a lowly mine worker living in town…. every time you look up, you see your boss’ house, looming over yours.

The house up on the cliff is now a restaurant – haven’t been yet (just biked up there for the view). At night, with the restaurant lights on, you can see it from just about everywhere in town. 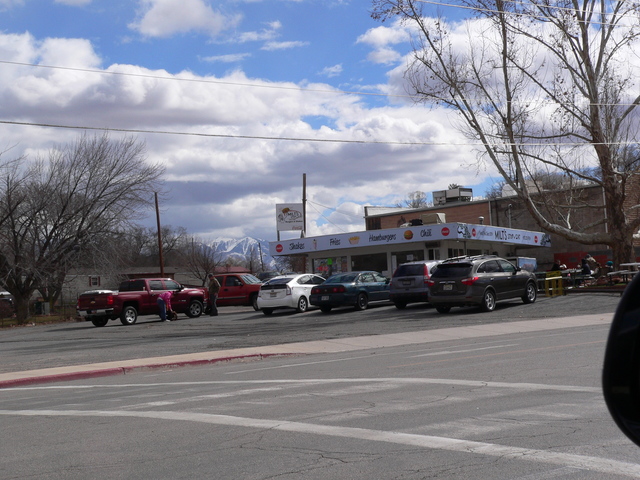 *The* restaurant in town is Milt’s. Back in the uranium boom, one guy decided not to go work in the mines; instead he opened up a diner, and probably made a thousand times the money your average miner did. Still open, but basically unchanged for 60-plus years. Well, maybe they changed the french fry oil once, but that’s about it. Absolutely everyone in town eats at Milt’s. 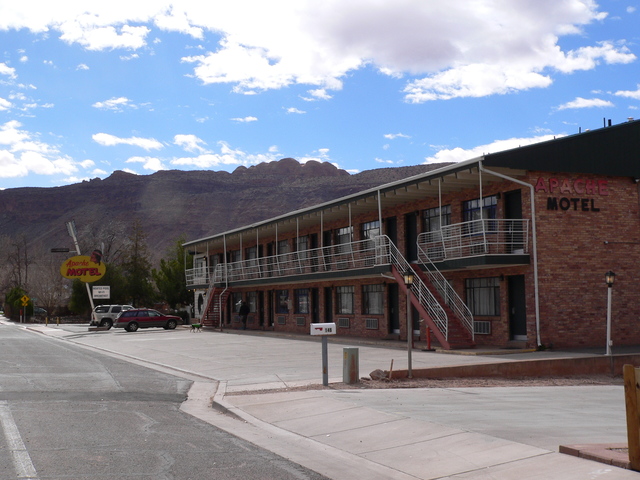 Another 50’s relic… John Wayne slept here. No, seriously – he and countless other Hollywood stars were here in that whole Western-movie fad of the ’50s and ’60s. They’re still shooting films here – and videos, and commercials – there’s even a Film Commission and a few production companies in town.